Do you know these facts about your favorite games – Shigeru Miyamoto designed Mario wearing a hat because he found drawing hair difficult. He also drew Mario with a mustache because a mustache was easier to see than a mouth with 8-bit graphics.

2. GTA San Andreas: only open world game that you can train player

Do you know these facts about your favorite games – The name San Andreas was used because the fictional cities and towns in the game are meant to resemble the Los Angeles area in the 1990s. This region sits on the San Andreas Fault, which is a major cause of earthquakes in the area. In the game, the city of San Fierro shows signs that a quake has caused damage and you can even hear about it on the in-game news reports.

4. The GTA V Map is Bigger than the Entire Island of Manhattan

It may come as no surprise that GTA V map is the largest of any Rockstar games maps so far. It tops the size of all other games in the GTA series (beating out GTA IV which previously had the largest in-world location) as well as game such as Red Dead Redemption and Max Payne.

Do you know these facts about your favorite games – It was the first game in the series where you could browse the internet from in game computer and many of the sites in game are real life websites on actual domain names.

Grand Theft Auto was originally a racing game called Race ’n’ Chase, however, a glitch made the police cars go crazy, ramming the player. This glitch was so popular with testers that they rebuilt the game around it, creating GTA. 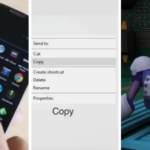